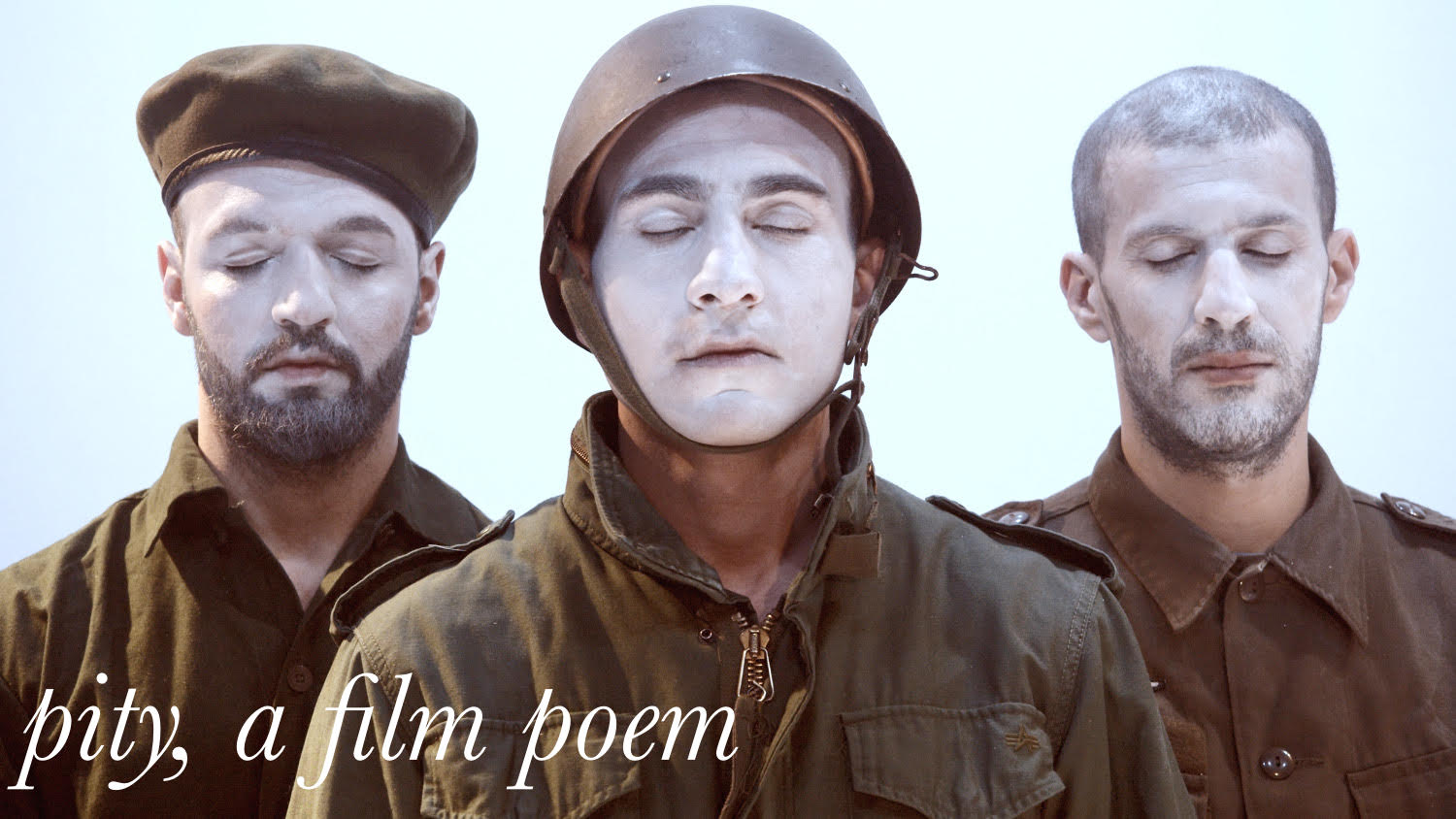 This essay attempts to show the reader a glimpse of Pity, a film poem by Iraqi Bodies- a performance collective based in Gothenburg, Sweden, led by Artistic Directors Anmar Taha and Josephine Gray. The film was screened at the 10th edition of Attakkalari India Biennnale 2021-22. The film’s conceptual note reads, “ Pity, a film poem is an ode to image-making. The medium of film has always been present in the oeuvre of Iraqi Bodies. Never on stage, but as an art form existing alongside  live performance.” The work of Iraqi Bodies explores the link between movement and gesture, between dance and physical theater. The poetics of awareness is an absolute given in their continued search for a radical scenic language. As a writer, my intent here is to recount my first-hand experience of viewing the film for the reader and in that hope to recreate for them the immersive experience I had while watching the film.

There is a pair of feet wearing green boots in one corner of the room. That pair of feet belongs to a corpse, who is wearing green pants and seems to have fallen inside a tank. The feet propped up and their upside down body submerged in the tank. It is a blue oil tank. A log of dead wood hangs and swings somewhere in the other corner. The feet in the tank are dead. Their perfume must have spread in the room. We, the viewers, notice the smoke in the room. There is a black stand at one corner, it turns out to be a mic stand. A black stand in which people make dead promises and now there are three corpses in this room. With so much death in one place, the flat silence of the white walls feels more like a scream. The silence stands there like another corpse.  We can sense there is something in this room, something that does have an unseen presence. It is as graspable as any physical presence. As we view the unseen and wait. Wait. Wait. We wait and we leave no footprints behind the screen with our eyes.

A man wearing glasses with black frames enters. He seems to be standing proud with a straight spine wearing an all-black attire. He does not look like a man who has been condemned to death. As he takes the mic, he looks like a man who is going to give his last speech. He tells us that a few votes from either side would have made a difference. We can only wonder. Though he says he has no grievances, he has grievances, and he goes on to share them. It looks like he is ready to give his last speech. He addresses the invisible audience. They demand a corpse, he says. A fourth corpse in the room. Who are they? Is it me? Is it you?

Death is never an expectation. Today in this room, it has become one. Death is what is expected of him. 30 is an expected number. A mere number, a mere numeric, mere “30 votes”. 30 is causing his death, the man says. He has been awarded death. An award for which he is not grateful. Why does death seem so beautiful in this room? What can he award himself at this moment? A life, if he could. Something he deserves or maybe does not deserve. The green boots start shivering as if the condemned man’s life got transferred to the corpse, or plainly out of exhaustion and cramps that can occur within a live body from staying in an upside down position for such a prolonged duration. But it is a corpse, and these are just the last few nerves of a corpse. We have nothing else to do but believe and watch. The feet continue to shiver just like the last nerves of a dying fish.

The man awarded with death has no pursuits in his life. He has only sought to endeavour each and every one of you to mourn for themselves before they mourn for the state of their homes, their cities, and their worlds. What does he deserve for wanting you to mourn for yourself first and then for the world? He has been rewarded death. He chokes on something. His hands come up to his face and wipe off his mouth. His sweaty palms cannot seem to function at the moment, but he is calm and proud with a straight spine. We observe him, we observe the things we see in this room, and we observe the things we do not see. He takes the mic into his hands, touches his glasses and just stands, in all his stillness. No more words left, he is left speechless in his last speech. Oration was never one of his pursuits and death was never an expectation. The log at the other corner swings and swings, and the feet shiver.

Is every dying man a wise man? Or do they have to be because you would like them to be? Dead, wise, and gone. Frame them up and mount them up on the walls like gods and prophets. Imagine their wisdom and celebrate their legacy. That is how the world revolves. The man in glasses would like to differ. It is time now, for him to die, and for you to live. Swinging and Shivering continues.

A white table with red fruits, a comb, a small chair, and a woman in a blue gown. She is waiting for someone, as the tree continues to swing. There is something playful brewing inside her which makes you smile and maybe fall in love with her a little. I really did. She is standing still and waiting. Waiting. Waiting. We wait with her. Another woman in a red gown enters and sits on the small chair and looks at the comb. The comb, an object we all carry, an object we all use or have used in our pre-balding days. What is going to happen now? We sit and watch, and the tree swings. She reaches for the comb. Who reaches for the comb, you ask? The lady in red. She combs her hair like we comb our hair, detangling the ends first and then detangling the roots. She walks towards her. Who walks? The lady in blue. She takes the comb and starts combing her hair. Whose hair? The lady in red.

Two women, one combing and one being combed. I have seen mothers comb their children’s hair. I have seen monkeys killing the fleas off their babies; cleaning their bodies very diligently. The comb is kept on the table now. The two women exchange looks, something has been said without a spoken word. What is it that has been said? An understanding exists between these two women that we are kept out of. We observe them. As we do that, we see someone else standing next to the swinging tree. They don’t have a face. ‘They-don’t-have–a-face’ is carrying something. It looks like a tool. We observe again. It is a hammer. We also hear someone playing a musical instrument. How long has it been? It’s a flute, I think.

The woman in red picks up a fruit from the table and looks at it, almost as if it were a child and not a thing to eat. She is still sitting on the small chair and then keeps the fruit back on the table, as if she had sinned by touching the delicious fruit. The woman in blue is still standing and her hands are twitching. She wants a fruit too, it seems. Bite it and eat it please, lady. We also want fruits. But she is sweet and loyal, as expected. She picks a fruit and then offers it to her companion in the blue gown, who refuses it almost immediately. Finally, she bites it. As expected, the fruit is juicy and fleshy. Was the bite an expectation or was the juicy flesh of the fruit an expectation?

‘They-don’t-have-a-face’ has moved now. They are standing behind the sweet lady in blue with a hammer in hand. The air is thick now. It is no longer playful and feels suffocating. Poor sweet lady, will she be rewarded with death too? So many questions but all we get for an answer is a blackout.

The fruits on the table are gone and the lady in red is gone too. The lady in blue is combing her hair, she seems less twitchy and more relaxed, we wonder why. Wait, we can see ‘They-don’t-have-a-face’ standing next to a wall. They are holding a plate of red fruits, but why? Why is death not an expectation? When death is the only probable post-life, why is death not our only expectation?

The log of dead wood is not swinging anymore. The walls are not screaming silently anymore. One is holding a plate of fruits and the other is combing. One comes to the table and places the plate of fruits on the table. The other stops combing. Why is no one talking? Can nobody feel the frustration? The other looks at the fruits, as if trying to remember her last meal and if this could be her next. It looks like it won’t be her next meal. The other starts combing again. The log in the corner, our only constant. I feel better now, ‘They-don’t-have-a-face’ is no longer holding a hammer. Their hands have been busy holding the fruits. We heave a sigh of relief, a breath that we did not know we were holding in until this moment. The other has not been rewarded with death. But we have been rewarded with another blackout. We are condemned to blackouts. Are blackouts our expectation? What are our expectations?

The log hanging in the corner, still and no longer swinging, ‘they-don’t-have-a-face’ sitting on the small chair, the one on which the women sat earlier on, and the white table. It is only now that we notice the red rope on the which the log hangs. Red, white, black and brown, these are the colours we see. We see no faces. Only colours. Block colours. ‘They-don’t-have-a-face’ is no longer an intimidating figure. They are like the spirits you meet in the mountains. You want to befriend them but you don’t know how to. There are no ‘how-to-befriend-mountain-spirits’ guides or books. It’s a hard life. But there are ‘how-to-live’, ‘how-to-write’, ‘how-to-dance’ books. Would you like to try them?

Three seated bodies covered head to toe. We see that they are fuming. We see they are not just metaphorically fuming but also literally. Smoke is rising from their bodies. One body coughs, the other two also cough. The log swings right above their heads. There is nothing funny about smoke, fumes, the log and these bodies, then why do these three seated fuming bodies make us smile?

It was a delude, there was no interlude.

We hear a bell or is it a clock?

We hear some voices or is it a choir?

They appear as war-torn soldiers.

A silence sets in.

The faces blur out. 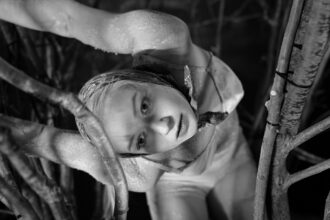