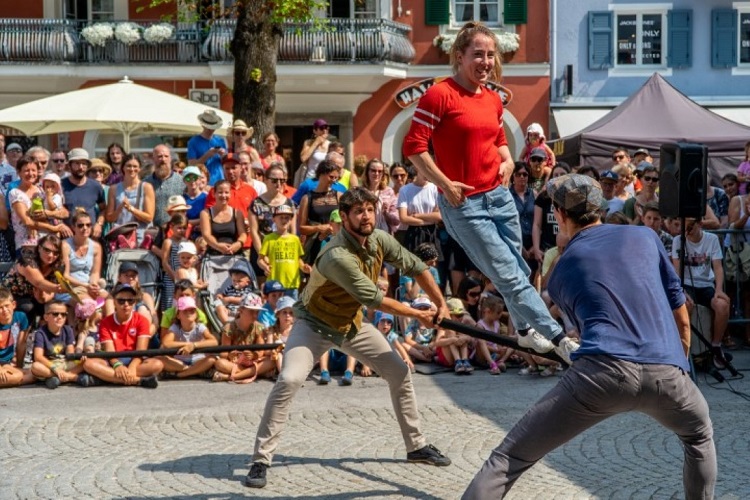 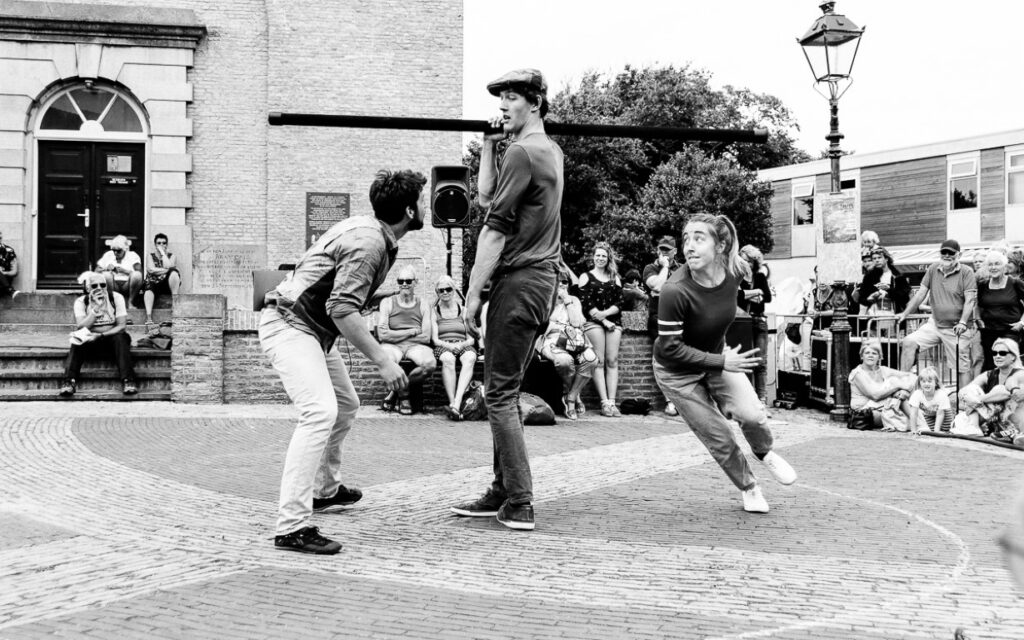 A recollection from an improvisation workshop by Teatime Dance Company

The risk in improvisation is that we always end up repeating movements and get too comfortable with our habits and patterns. What if we throw a couple of sticks and juggling balls into the mix? I could only imagine us being cautious all the time so as to avoid clumsiness with the objects. The 4-day hybrid (online and offline) improvisation intensive offered by Teatime Dance Company, Netherlands at AIB 2021-22 was about this. Bringing to us a seamless blend of rigour, discipline and fun, the trio from the company, namely Hannah Rogerson, Pieter Visser, and Bavo De Smedt took turns each day in conducting the sessions and sharing their individual expertise. The format of the workshops generally consisted of meticulously guided warm ups, and a step by step deconstruction of tools that have been central to the company’s choreographic works and vision.

On day one, after customary announcements, Hannah asked us to introduce ourselves and share something which could be as simple as, “I love cats” or “I am very fond of my niece”. Whilst we had already begun massaging and waking up our bodies, I found this particular instruction as another icebreaker that would encourage a sense of intimacy amongst all the participants even through zoom. It was as though we were sitting in a traditional circle for “checking in” right before starting a session. Peeping dogs and cats from inside a few zoom tiles, would sprinkle some fun and ease into the intense focus and excitement us as participants were carrying in our bodies and minds. Hannah began by asking us to improvise with different body parts while imagining we were inscribing our names into the space. We found ourselves playing with variations of speeds, rhythms, levels, etc. sometimes using a single body part, other times using combination of two or more. She let us further immerse ourselves into this improvisation exercise by adding another layer to her instruction, that is, by asking us to imagine as if our bodies, while in this moment of inscribing our names into the space, was laced in oil, jelly, honey, water! New patterns met old patterns, we discovered new pathways through body parts we otherwise barely paid any attention. There were limitations, of our own style, preferences, and of the fact that we were bound by a task; but imagination indeed freed us.

“Juggling is like dancing”, a minimalist approach that Pieter’s teaching style brought to us on the second day. Pieter demonstrated a few seconds of swift juggling with a couple of balls- something I thought was out of my league, probably because of the dazzling charm to this craft. It eventually dawned on me that it was all about the technique combined with an extremely meditative focus. There was more to juggling than just tossing the balls in the air. I realised how the technique of juggling can really enhance our sense of spontaneity and creative decision-making. Before gripping the ball, we warmed up our fingers, palms and wrists, building resistance, and activating all senses of our hands and arms. We began by acknowledging and familiarising ourselves with “the universe” -the space in between the palms. We learnt how to be patient when we drop and catch the ball, how to understand this in-between space, so we can start to feel the ease of the play that can then enable us to complicate it with levels and speed. We learnt how it wasn’t about looking directly at the balls but just sensing them. We were simply dropping and catching the ball for the next few minutes, getting bolder at making riskier choices even in orienting our bodies in different and indirect ways while repeating the same action. Then, we slowly moved on to other fundamental techniques in juggling – holding, rolling, bouncing the ball off a surface of our body, trying to dodge the ball using the body, while avoiding using hands too much. I could sense how gradually we all had become more comfortable with the object and somehow developed an intimate, meaningful, and focused relationship with it. Tossing and catching the ball between palms was the cream of this layered practice. We grappled with angles, distance, height, twists, and directions. What was most fascinating for me to observe was how the finesse of juggling which we were trying to learn and perform at first, had slowly transformed into a crude and chaotic play of running behind the slipping ball. It was really this crude running behind the ball that gave us our Eureka moments to cherish, while also making us giggle and smile at our follies. Risk, flow, and thrill for the ball overpowered any preconceived pressures of performing or chasing any sense of perfection.

Bavo conducted the third day of the workshop and taught us how to work with sticks using principles of Chinese poll. Bavo allowed us to play with them in our own ways, and come up with our own style and variations. This clearly meant how well he knew how to keep a strong balance between individualities, collectivity, and diversity intact in the room, which is also the core philosophy of Teatime. Bavo’s practice is acrobatic and physically demanding. His warm up, that prompted us to perform a lot of animal-like movements, prepared our bodies with strength and stamina, while initiating a sense of flow and efficiency in our muscles. Soon after, Bavo gave us our first task with the sticks, which was to take a moment and observe them carefully, and visually estimate their texture, sound, volume, weight and other such properties. This ritual struck me the most in the way it set the basis for deepening a sense of relationship with the object. We learned how our sticks could be taken to the extremities of our arms, in that they could be held and moved as extensions of our bodies. At the same time, a stick could be brought close to trace the body, sometimes with no hands- rolled, held, and balanced on different body parts such as our fingertips or on the curves and edges of our feet. Bavo encouraged us to find creative ways of planting the stick in space, evoking a bodily/movement response to it, try varied ways of dropping and catching, and arrive at all kinds of possibilities and choices of engaging with it. Amongst these choices, what Bavo noticed, as he shared with us later, were each individual’s unique story. Stories that were so abstract to get noticed at first, and yet so fathomable.

On the final day of the workshop, individual explorations gradually became collective ones as the participants in the studio started interacting with each other and also tried making movement phrases through group compositions. We went through all the improvisation exercises we had been practicing over the last three days. We were asked to choose any object we would like to play with, in that, bring to it various techniques and principles of juggling and Chinese poll we had learnt. We started the ritual Bavo had introduced us to, that is of scanning the object and then slowly transitioning into finding ways of embodying its qualities as well as discovering the object’s own range of motion. The Teatime group introduced us to basic choreographic principles- space and time, dynamics, connection with fellow dancers, architecture, and so on. They demonstrated these principles through bits of improvisation in a new studio space that had a set-up installed for another performance. In that, they tried adapting their movements to the studio’s given environment, and later discussed with us the possibilities of choice and meaning-making in choreography that we as audience observed in their demonstration.

What I appreciated the most was the fact that the company was able to include into their activities also the participants who had not been able to keep their videos on. Each of our questions and ponderings were addressed with equal attention. Hannah’s curiosity and enthusiasm, Pieter’s calmness, and grounded nature, and Bavo’s chirpiness and exuberance reflected in their individual pedagogical methods and performative selves. Their choices with similar or different objects as well as their patterns invited me to read their individual personalities. The Teatimers led us into observing genuinity within stylisation, and getting out of our heads by slowly and steadily dissolving any unnecessary awkwardness. We began sieving through the glory and glamour of tricks, and learnt to approach them with patience and keen observation.