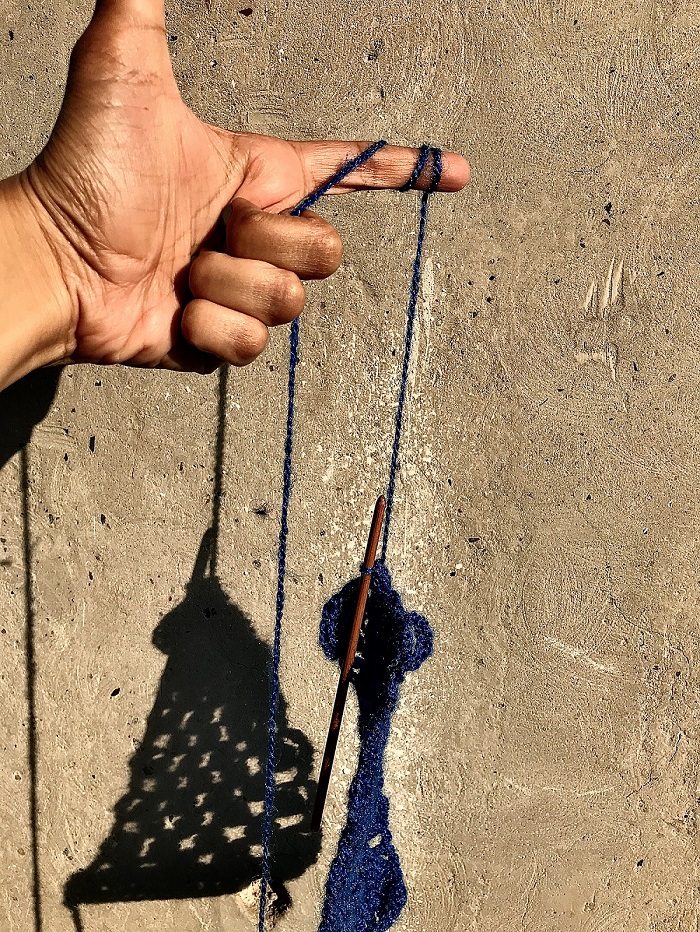 -On Yarning by Meghna Bhardwaj

There exist huge political discourses around the term ‘domestic’. Most of which focus on the depravities within the domestic. The gender discrimination, the violence. In the context of the pandemic, when all of us found ourselves locked up inside our homes, the domestic further became a site of constraints, limitations. But, can it be viewed and perceived as a site of abundance potential for the body/bodies in/of it?

Yarning, an online exhibition by Meghna Bhardwaj, at the Attakkalari India Biennial 2021-22 festival encouraged me to reflect upon the term ‘domestic’ through the lens of dance and other varied aesthetic possibilities embedded within it. Bhardwaj’s three films and the accompanying sound score are a set of installations that invite our focus to the body/bodies in/of the domestic spaces. Bodies, which are immersed in the everyday acts of crocheting, knitting, weaving, sewing, or stitching. The questions that the works provoke are: what stories do these ages-long traditions have to tell? And how does a dancer relate, translate, and wear the movements of these threads and needles in this digitized age?

The first film bearing witness to the knotting skies opens with a kite flying in the blue cloud-laden sky. Then appears Bhardwaj, moving, spiraling, suspended in a corner, wearing red and blue, against white walls with plaited hair and forehead bangs. The body moves in response to the moving threads that are red and blue in color, released and hooked around the crochet needle and fingers, in a continuous cycle.

Threads, around fingers,  tangled and cross-stitched, twisting, intertwining, stretching, swirling, knotting messy but breathing one horizontal and the other vertical, making and breaking patterns failing and falling, rising In a never-ending loop

In this film, the inspiration clearly comes from a space of personal experiences, nostalgia, and memories, which the performer paints through a sense of resistance in her movements, and which together invite the viewer to start thinking of the larger socio-political context of the arts of textile-making and crocheting. “Discovering the microcosmic and the macrocosmic in the universal fabric” as Bhardwaj puts it in a post-discussion of Yarning in the WOD lab . Her moving/dancing body on one side of the frame, and her fingers performing the tightening, loosening, and knotting of threads on the other, reflect the play of this macrocosmic and the microcosmic, and in that the multiple rhythms and patterns embedded within the two. How much more or less is needed? Who gets tired and who keeps moving on? Who gets to choose? What is moving and what is being moved? So many questions cross my mind while I watch the film. In its repetitiveness and ordinary nature, the movement somehow makes a comment on the fabric of our everyday lives. A preset ritual, sometimes joyous, sometimes frustrating, sometimes unnecessary, and sometimes everything that we need to keep going. The threads and needles are no ordinary objects anymore, but have become the objects of reflection and everyday philosophy. The colors become symbols of courage and solidarity. And the body is a statement.

To unfold, reveal and render

Our stories, emotions, and hopes……

The film Do you remember the touch of a stitch?, in the very title itself is an impression of current times. Times where lockdowns and living in isolation have diluted all meanings of a ‘normal life’, faded the memories of being together, and made us fearful of touch or being touched. The film is a collection of seventeen visual essays contributed by participants from different countries, identities, and cultures stitched together into a single composition. As per the curatorial note, the participants were invited to film their interpretation of ‘weaving’ alongside creating a textual response which could be a memory, a proposition, a thought or just a few words. The idea behind the film was to remember and honor the deeply undervalued household labour and care of women across ages and societies. For me the film seems to suggest a ‘collective’ movement bringing together multiple individual movements.

The abundance of virtual dances and performances that one has had to witness hasn’t excited me much lately. But this work, in all its virtuality, serves as a portal of creative possibilities. The engagement of varied people with their crafts, creative ways of using spaces and filming, and a general sense of adaptation and comfort with the so-called ‘new normal’ are quite exciting to watch. Not to mention, the collaborations that have happened in the making of these works, has indeed brought together artists separated by vast geographical distances. And it is there that one begins to see the richness and value of the virtual media.

The sound installation Hushweave by Zeekos Perakos comprises two soundscapes, titled, Tactile Studies, and Spit and Split. The two sounds braid beautifully with the films while conveying an independent voice of their own. Their presence has clearly not been limitedly employed as a generic background score. What they suggest is a kind of organic stimulation, carrying bits and pieces of the ‘everyday’. One hears in them sounds comparable to throwing stones, grating rubber or plastic, stuck cassette or sliding marbles, etc. The sudden pop-ups, shifts in rhythm, silences, and sharpness offer several textural sensations for the listener. I personally have a moody relationship with music or sounds. In the case of these two sounds, I must confess how I felt like responding to them by moving my own body in space.

The third in the series, Alecia Neo’s Root Intelligence is a short film which emerges as an abstract reading of Bhardwaj’s Yarning. The film opens with overlapping images of plants, roots, skins, fibers, and foliage, all moving, in their own time and space. I saw the film as a prologue to the larger context of ‘Yarning’, reflecting, and reminding from where it all begins. The roots become a significant metaphor for the woman, the earth, and the origin.

For me, more than a tale of remembrance, acknowledgment, and honor, the three films bring forth the questions of undue pain and taken for granted household labor and care. It’s not just the labor that has been invisible but also the bodies who have been invested in it. One is reminded of generations of caregivers who have worked hard to keep the household together but whose contributions have gone completely overlooked. It must be underlined here that the acts of stitching, knitting, or weaving, beyond just being acts of unpaid love and care inside the house, have also been the means of earning a living for many. My own mother used to stitch blouses for a price as low as Rs. 30. The thought of which has always somehow provoked a sense of discomfort in me. The same discomfort that one’s class conditions bring with it. As I get older, I accept it more and more, and in fact grow proud of it everyday.  Female domestic labor and care in all its ordinariness, more than a moment of celebration, demands recognition for its ability to produce and reproduce knowledge and power. These films, in their limited duration, reminded me of the  prolonged journey of my own mother, and with that of several others who I have never met but whose lives I tend to imagine now. Now when I think about it, I see how simple household ways of creating, mending, organizing fabrics are such deep ways of empowering our human lives. So unnoticeable, and yet so integral.

The works interest me more because they provide ‘an agency’ to a viewer through loosely held curation where one can make a choice of what they view.      As a dancer, it is a relief to see when any art acknowledges and puts faith in the ordinary. Yarning, in its concept and curation reveals the strength, challenges and multiplicities in/of the domestic. The term ‘domestic’ is so complex and layered, I realize. It’s hard to tell whether it’s a place, a feeling, a concept, an idea, or a boundary. Yi-Fu Tuan says, “Place is security, space is freedom: we are attached to one and long for the other.” This is to say that to understand the ‘domestic’ the analysis can no longer be limited to the long-held theoretical narratives, dictionary meanings/statements, or popular google searches. To hold more holistic and meaningful conversations, we need to intervene through the body, its practices, and experiences. What better time than a pandemic, which forces us to be at home and gives us the time to reflect and engage in conversations through and about everyday embodied household practices. It is for these reasons, I find Yarning as extremely relevant and attentive to the current context.