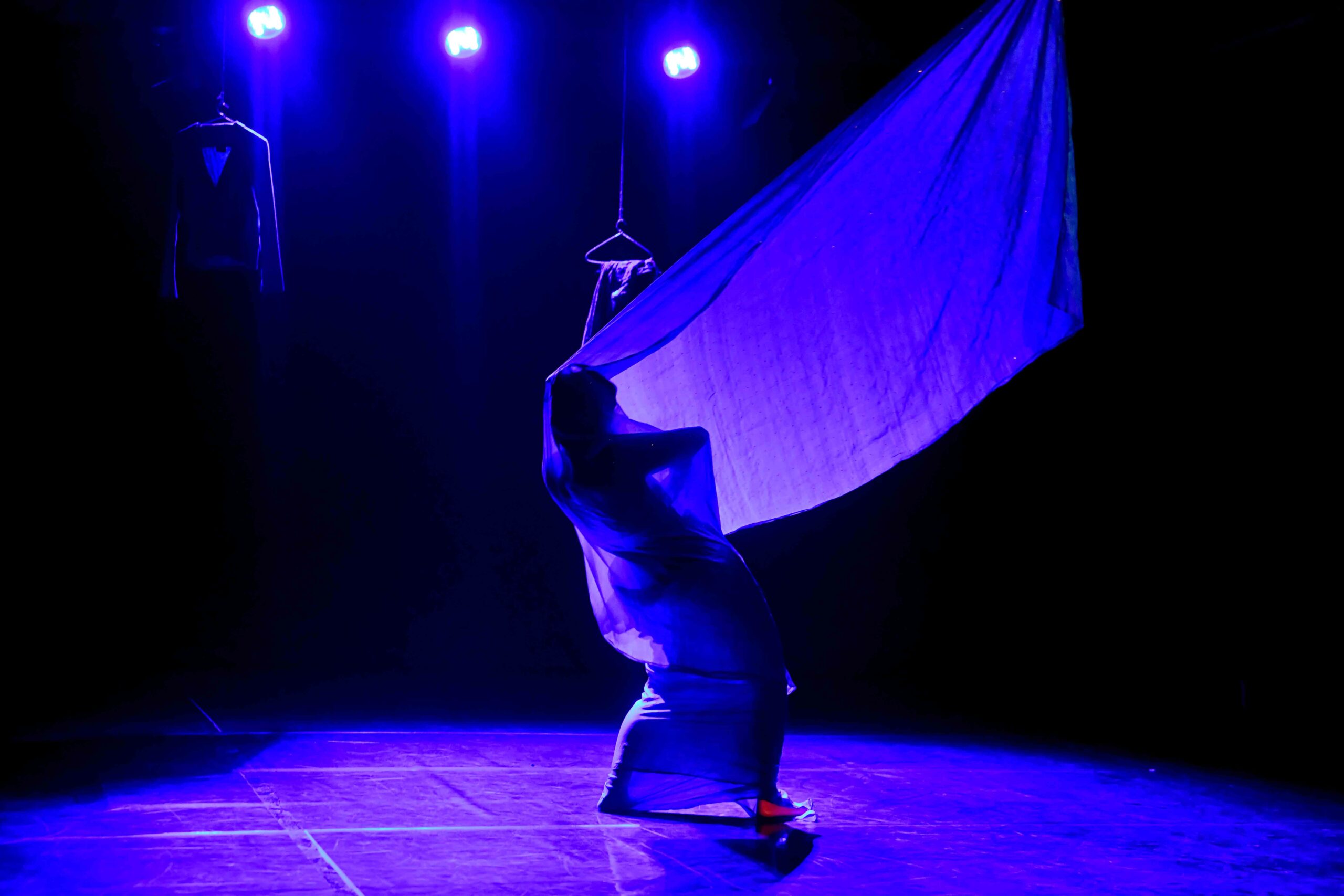 Layers by Deepanwita Roy was very true to its title; beginning with its initial layer of pauses and silences, with subtle movement vocabulary that almost felt like feathers against soft skin and then gradually gravitating towards larger, faster and spatially encompassing movement. The sound score began with light electronic tones that sounded like metal and iron, slowly transitioning into more ambient textures which together matched the gradual crescendo of the dancer’s physical movement. 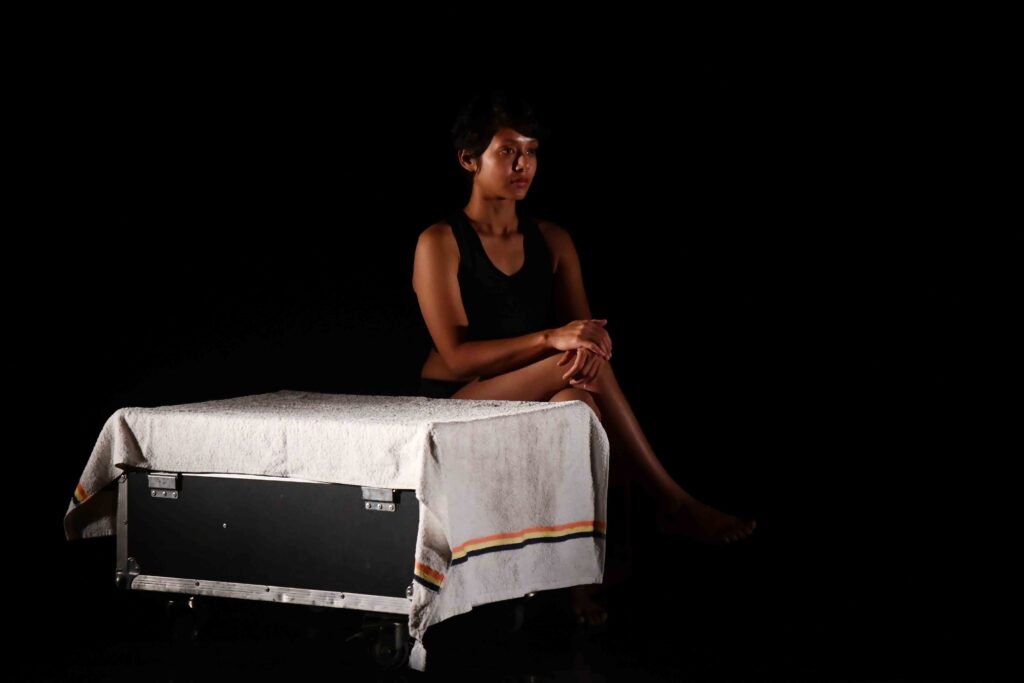 The use of fabric in this piece seemed vital, and the contact between the body and the fabric set against a dreamlike blue light, and the silhouettes that it produced gave me a sense of surrealism. The slow revealing of the various pieces of fabric and how each was used to convey the stories and memories of the mind through the interaction with the moving body, was like a story in itself. What truly stood out was the section of the piece where the movement vocabulary was created out of heavy influences from Kathak- quick staccato movements that stood out because of the drastic changes and a sense of unpredictability that got evoked in the performer’s body in juxtaposition with the subtler movements that she had performed until then. The piece begins to pick up its pace at this cross section of movement vocabularies- Kathak and Contemporary. ‘Repetition’- a key choreographic devise in contemporary dance or any dance form for that matter, was extensively used during the piece as a recurring motif. For instance, right at the beginning we see the dancer touch the fabric and then repeat this act of touching many times till her body gains a sense of momentum, and the touching becomes more and more performative. Also, towards the end she performs a movement with her legs that after many repetitions starts to look like a kind of galloping back and forth. This use of repetition helped to bring out a sense of struggle, both everyday and political, that in my reflection, not just this performing body ‘on-stage’ but any human body in life may be going through in current times. 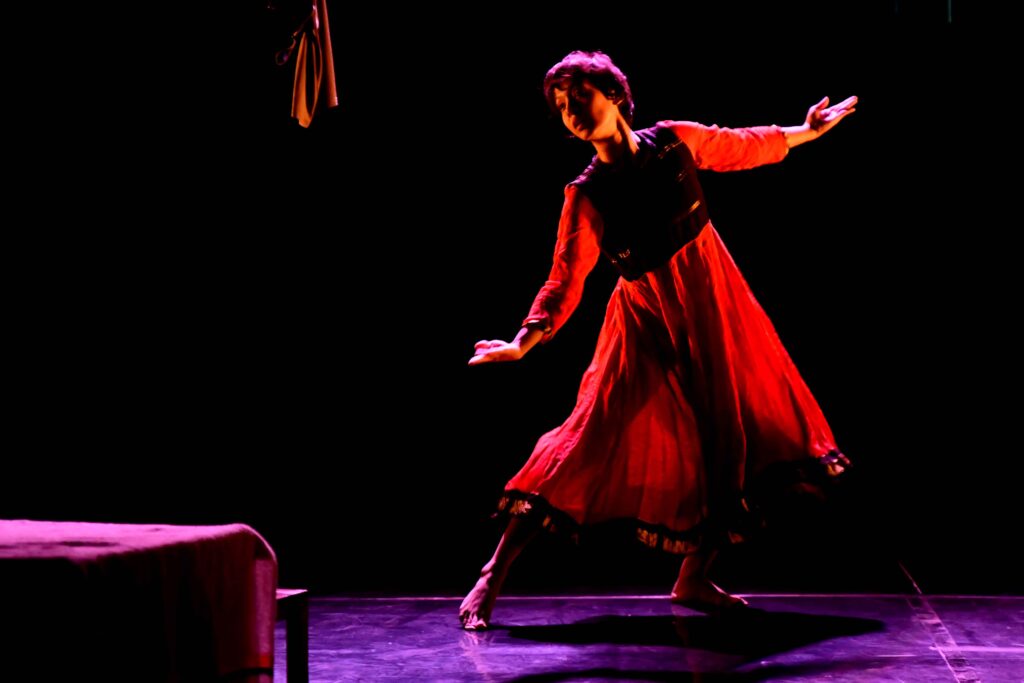 With each fabric, Roy’s roles changed from the subtle nuanced body, to the hidden sensual one, to the dancing performative body, to the forced alpha female body, to the bare identity-less self. As she moved briskly through these roles, her body oozed the versatile nature of the work. On delving deeper, one may arrive at the understanding that the piece speaks beyond what meets the eye and the term ‘body politics’ comes into play. How far have we let our bodies be regulated? Do we really have a choice and does the very fabric of these regulated systems demand and choreograph how the body behaves? The piece journeys through these expressions, touching upon ordinary actions like ‘sitting’ and how even this is modulated or tuned to effect. It also briefly raises the concern of the body in an extreme bureaucratic/corporate environment and one sees Roy’s embodied franticness against the degree of control and censorship that our bodies experience in today’s times. In other parts of the piece we see interactions between the hidden body and the engulfing fabric, the portrayal of which felt almost like an effort to keep the body veiled from external influences. Even the performing body has gradually been tainted and changed into something more ‘suitable’, where she as well as her performance vocabulary may be falling prey to these regulated systems. As the piece nears its end, the dancer is seen slowing down and stealing a moment away for herself, trying to navigate through the passages of her body and maybe even coming to accept the reality of the environment she is surrounded by.

Roy’s effort in trying to expose how malleable or reactive the body has become to the so called ‘system’ felt like a very genuine attempt to me. At the same time, I also felt like there was something more to come, something more to unravel through these fabrics, something that could further bring out the nuances of the everyday tussle between the body and the bureaucracy. I am not too sure whether Layers was intending to make any specific political, almost Kafkaesque, statements, but it did leave me with some questions- what will a free body look like, feel like, move like? Is it even possible to imagine and inhabit a free agentive human body, or has such an imagination already become a ‘myth’, a ‘fantasy’?

Layers was created and performed at AIB Open Studio 2021-2022, commissioned by Attakkalari Centre for Movement Arts. 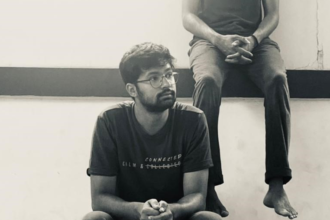 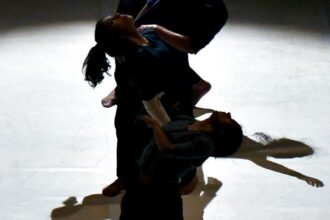 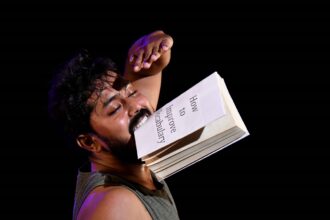