HomeTushti Aravind“Costume is like the second skin to the dancer” 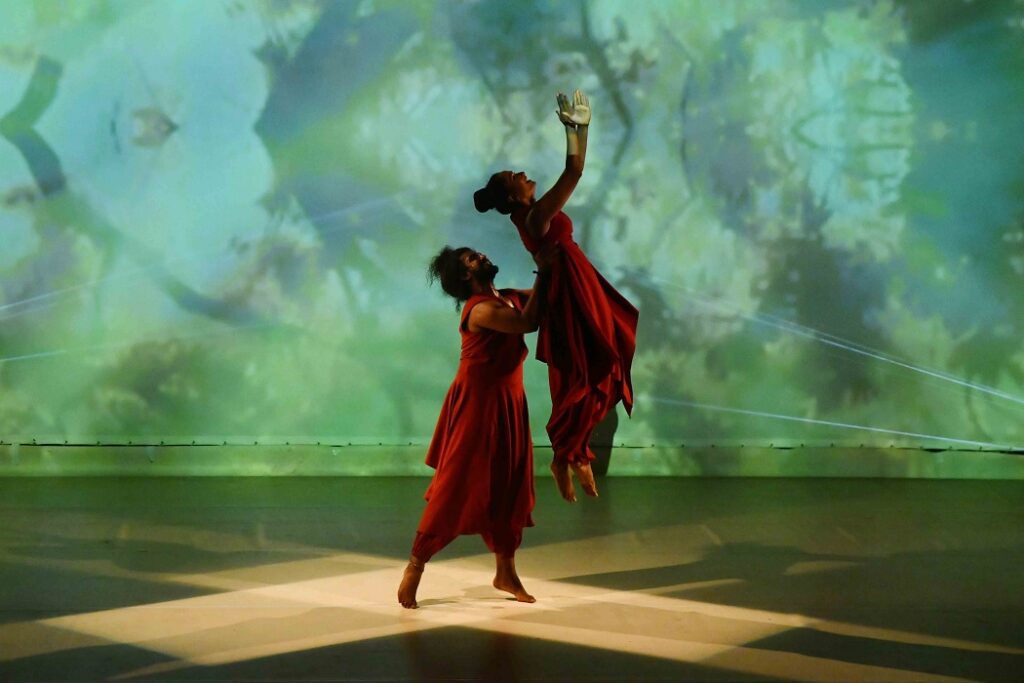 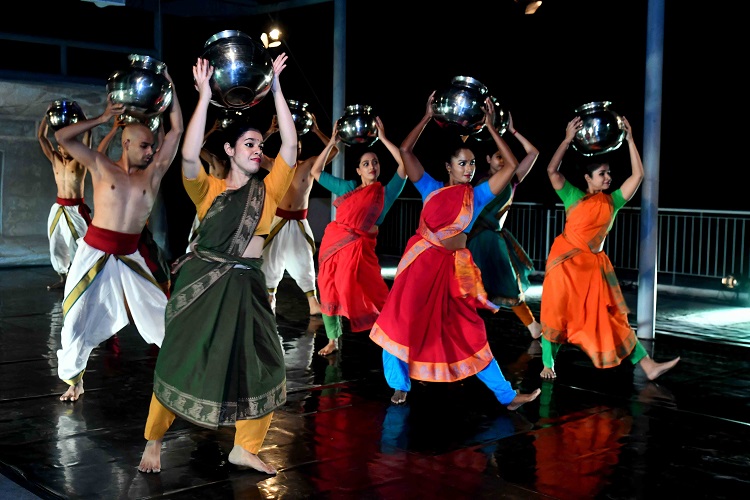 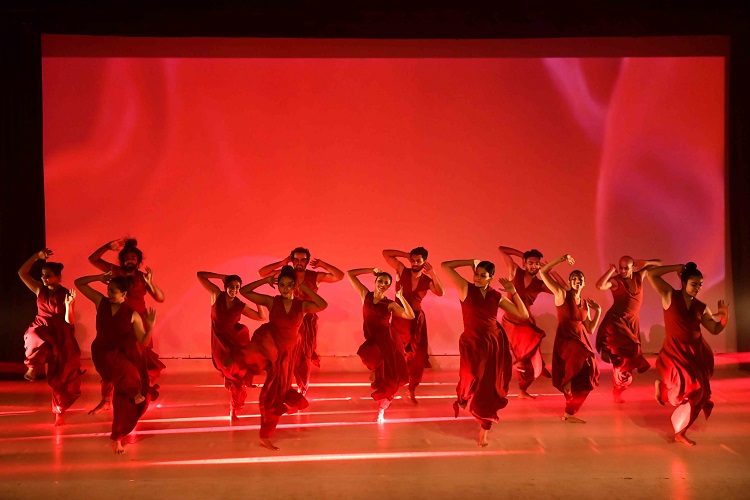 Watching a dance performance is a joy. There are so many different things happening on stage. Only recently however have I started noticing the costumes. Physically, the costume is like a second skin to the dancer, an extension of her body. The costume is, in essence, what is closest to the dancer. More so than the lights or the stage. Perhaps only second to the choreography. While dancing, wearing something comfortable that allows freedom of movement is vital. It’s as if the costume can restrict or enable movement depending on it’s design.

In many traditional forms, the costume is supposed to reflect the character that the performer is playing. There are certain colours and styles that inherently refer to a character. In Kathakali, this is especially visible. Heroic characters wear green makeup, while villains wear red or black makeup. The size of the headgear is larger for villains than for the heroes. Women are easily perceivable by their simpler costumes and makeup. Yudhishthira wears all white, to signify his purity, while black costumes are used for hunters and adivasis. Krishna is instantly recognisable across all Indian dance forms by his yellow turban, and peacock feather, which serve as identifiers as much as a costume.  In contemporary dance however, there isn’t any tradition of narration to fall back on. Each piece is new, it has its own rules and ideas. In contemporary dance then, the choreography defines the costumes’ purpose. How the choreographer visualises it’s role in the dance and how the costume designer works with the dancers both would play a role in the resulting attire.

While watching the performances at AIB, I was fascinated by the variety of costumes I got to see.

In Sthavara Jangama, a piece about the migrant crisis in India, choreographed by Jayachandran Palazhy, there is a mixture of traditional forms and contemporary movements, which also gets reflected in the choice of costumes. During the first part, the choreography is pure Bharatanatyam. The dancers wear traditional Indian clothing. Sarees and dhotis, which are colour coordinated in reds, yellows and greens. These are what is usually worn by Bharatanatyam dancers, but far less rich. In that way, one can see the origin of the movements, a legacy from long ago. In the latter half, the dancers wear long flowing tunics and salwar pants in deep red. The silhouette created by the costume follows the lines of the dancers’ bodies. When they make large movements, while jumping and turning, the tunics swirl out, creating a larger effect, occupying more space and filling up the stage. This way the dancers’ presence grows with the size of their movements, which the choreography takes into consideration. The looseness of the clothes allows the dancers to move about freely – they have a lot of movements – rolls and slides that take place on the floor, and one can see their movements are unconstrained by the clothes. The lack of sleeves was an important decision here. The dancers use their arms a fair amount, creating motifs and images. The absence of sleeves in the tunics helps draw the eyes of the viewers to the arms, the stark contrast of bare skin against the deep red cloth.

The dancers are barefoot throughout the choreography that plays out not just on the stage but way beyond it, occupying all the space the room of the auditorium in its entirety can avail. Perhaps this helps them move more easily? Or gives them a connection to the floor, helps them ground their movements, and gain a better grip under their feet?

The musicians, who are also on stage and therefore as visible to the audience as the dancers, have costumes of their own. They are wearing a simple saree, with a half sleeved shirt on top. Their instruments may be read as the central part of their costumes.

The dancers’ transition from traditional to modern clothing could be viewed as a form of migration. Their bare feet, a way to connect the ground reality to their dreams. The costume, then, also connects with the subject matter, not just the movements in the choreography.

Sleeping Beauty was an interactive re-interpretative performance by the Second Nature Dance Company from Korea, where I found a different approach to the costumes. Each of the dancers had a different character. They were dressed accordingly. While in Sthavara Jangama, the dancers worked as a group, with near identical movements, here the dancers are clearly distinguishable. The choreography is similar, but they are dressed to differentiate. It is like seeing variations of the same theme. The only commonality is perhaps the colours. All of them are dressed in shades of white and grey.

In the introductory portion, when the audience walks amongst the dancers as they pose and move, each dancer has a different movement than the other. It is here that their characters are most clearly and closely visible. A Greek or Roman god, a pianist with ruffles falling from her neck, a languishing girl in balloon sleeves at the edges of the avenue path that leads to the seats, a drunk woman in a tube top and coat, a buff prince on a terrace looking down, two others tangled up in threads tied to the wall.  A noticeable theme, besides the colour scheme is that all the clothes appear to have a baroque influence in their design – coats, long sleeves, puffed pants, ruffles at neck and hands, multiple layers of fabric over the shirt. The style appears to be an effort to tie the characters and their costume to the origin of the story – a French court with a sleeping princess. The dancers are barefoot throughout the piece, which appears to have no particular significance.

The one exception to the style of costume described above is the ‘Grim Reaper’, a character who puts the village to sleep, in that, is possibly a parallel to the evil fairy in the fairy tale. He wears a long hooded robe in dark blue. No part of his body is visible. It is designed such that even his face is deep in the shadow.

Here, the characters of the dancers are limited to parts where they move around the stage, separately from each other. The variations in costume allow the audience to differentiate the dancers, but do not seem to add more to the story. If the choreographer wished to show different characteristics, those were not perceivable.

Different from Sleeping Beauty, was Life and Times, a dramatic dance film by the Scottish Dance Theatre about human fragility and time. The costumes here were also character specific. The two main characters had eye-catching apparel. These were easy to follow as they danced their way around the rest of the cast. The lady wears a crumpled, slightly torn green silk gown, which has a cream underdress and deep pockets for the list of items she must remember and collect. Her hair is pulled up in a messy bun. The man wears brown calf length trousers, held up by suspenders and nothing else.  In his hair, a fake leaf wreath is nestled among his curls. Both of their makeup is bright, drawing attention to their eyes and mouth, which they use a lot, as they mock fight, and exaggerate their movements as they search for ingredients to create another character. The way they treat their clothes also reflects their disregard for the material world. Their actions are exaggerated and funny, leading one to view them as a comic relief to the real world. This is reflected in their bright and unique costumes.

The other dancers are almost like background characters. They wear various clothes in black, for the most part, save two of them, one in a purple slip, another in a beige leotard and sweatpants. Here the differences in the costume are more notable as compared to in Sleeping Beauty, because the dancers’ movements also are different. Each of them moves in a different style, with emphasis on different parts of their body. The setting, I feel, aims to emulate the studio setup, the everyday feeling of dancers. The \but also the specificity of each dancer, the way they move around each other while going about their own individual business. They appear to be like dancers at class – at informal rehearsals. There was a clear delineation between the two sets of dancers in the film, evident in their costume- the mundaneness of daily practice at the studio compared with the excitement of discovery. Perhaps to be read as a mark of those who follow as compared to those who create.

Conversely, Stick Stok was remarkable in its lack of costuming. A piece that was simply built around non-living objects, that is, its props. Choreographed and performed by the Teatime Company from Netherlands, it explores human tendency to juggle multiple jobs at the same time. The dancers play around with three poles of varying lengths. The casualness with which the dancers moved struck me. The clothes added to this. One could say that the costuming in Stick Stok was nonexistent. An anti-thesis of what I thought before, that the costume should create an atmosphere of distance and drama. Clothes that allowed freedom of movement, but weren’t what could be termed as “exercise wear”. The dancers merely wore everyday clothes – something you would wear to the supermarket or to a movie. All three dancers (two men and one woman) wore trousers. The men wore shorts with rolled up sleeves, one of them with a tee underneath. The woman wore a loose top with a floral design at the bottom. Going by the promotion pictures, these didn’t remain the same for every performance either. Perhaps the only specialised part of their wardrobe was their shoes, what seemed to be rubber-soled sneakers, to help them gain a grip on the poles for each time when they stood on them.

Looking at these various performances, the role of costuming appears to be highly diverse.

The costume reflects the mood of the piece as much as the dance does, as much as the lighting and set do. One can see how the costume becomes part of the dancers’ body in how they use it as they move. The costume can become a prop as well, when used in some of the steps. It can aid dancers to portray a certain personality. It manages to capture the audiences’ attention, directing them towards the dancer. This way it also adds to the theatricality of the piece. Sometimes it can allow the dancer to look relatable and accessible, but at other times aesthetically unique and distant.

A costume therefore, is not only what a dancer wears, but also a statement of intent, a showcase of character, a reflection of the theme, an extension of their bodies. The costume I conclude, adds immensely to the production, to its atmosphere and to its seamless aesthetic. 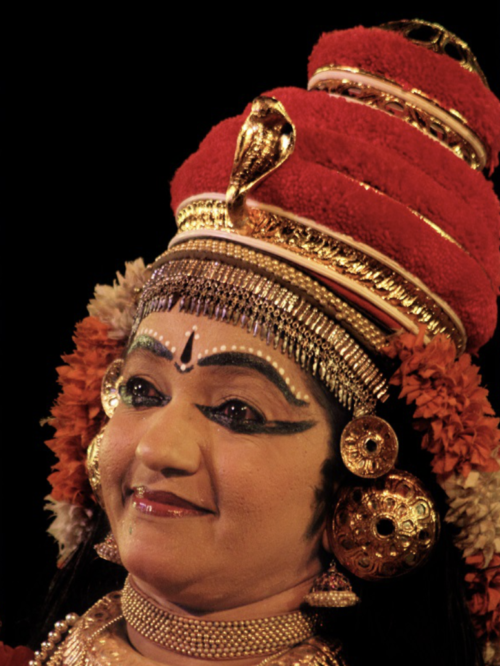 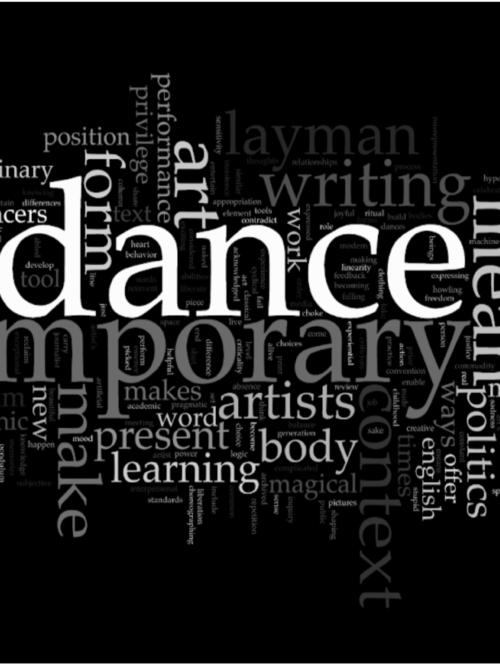 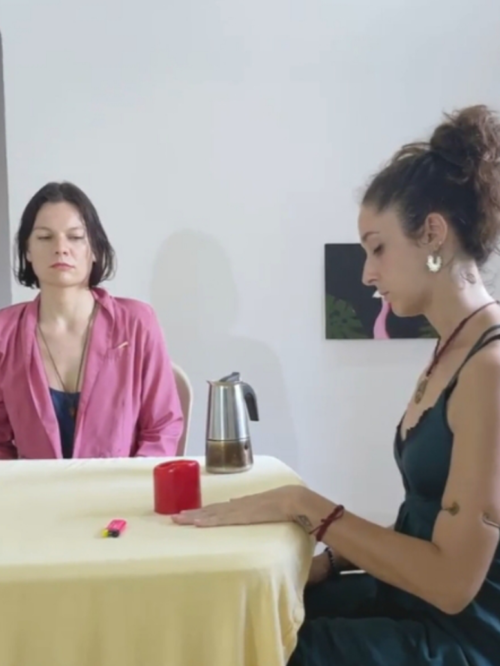